All about Mantra Chanting

Chanting is a rhythmical repetition (either silently or aloud) of a song, prayer, word or sound. It is one of the most ancient spiritual practices and a part of most religions and spiritual paths.

According to the Indian yoga tradition, sound is healing and sacred. It is also believed that sound is one of the most powerful forces. Chanting during a yoga practice deepens the concentration and devotion, calms the mind and improves the awareness.

Sanskrit, Hebrew, Native American languages or other ancient languages were made using the knowledge of sacred sounds. So chanting in these languages is especially beneficial.

Each syllable in Sanskrit resonates with a specific body part. Each body part came into being because it resonated with a particular core sound. This is visualised as chakra sounds. Each Chakra is like an energy center and it is represented as a flower. Each petal of this chakra flower corresponds to each sound and you can see all sanskrit syllables are represented from root chakra to third eye chakra. 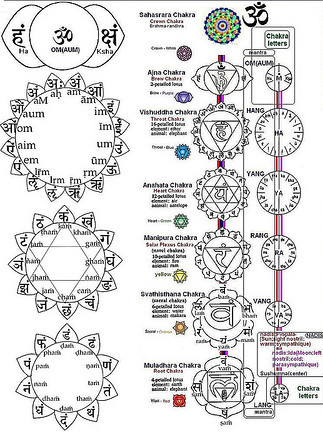 Hebrew also uses a very deep spiritual and mathematical understanding of the universe.

As a carpenter employs tools to build a home, so God utilized the twenty-two letters of the Hebrew Alphabet, the alef-beis, to form heaven and earth. These letters are the metaphorical wood, stone and nails, cornerposts and crossbeams of our earthly and spiritual existence.
In Letters of Light Rabbi Aaron L. Raskin explores the essence of these holy letters, illustrating how they continue to be a source of creation, reflection, prayer and inspiration in our everyday lives.

Chanting creates a high vibration around you.

The various energetic fields around you get activated and aligned.

The electromagnetic toroidal field gets super charged. It protects you from unwanted energies. So when we do mantra chantings we create and sustain this protective field.

We know that the whole universe is made of sound. Sound gives form. If there is no vibration, there is no form.

If you spear a little of your imagination, as you watch this film as it runs, you will see many things that answers many questions, you will see living forms, living amoeba, almost animal like creatures. You will see continents being formed, the Earth itself coming to existence, explosions, erruptions, atomic explosions and bombs. You can see all this and watch it before your eyes. Everything owes it existence solely and completely to sound.

Hans Jenny in Cymatics: A Study of Wave Phenomena and Vibration

Do daily chantings to cure various problems of mind and body.

Each of these syllables correspond to each of the chakras which also govern the 5 elements.

Chanting Om Nama Shivaya will help every one. Like this we have various chants that use certain syllables. Sages and rishis who created these chants understood the use of these sounds and hence created wonderful chants that serve a specific purpose. Each chant creates a particular vibration in the body as is seen in the videos.

Why do we chant about Shiva?

Shiva is in between your solar plexus and heart chakra. The interrelationships of shi shi shi ( sound of fire) and va va va ( sound of air). creates shiva.

To find Shiva, Ahankara needs to be transcended. You cannot know Shiva if you differentiate between things. Differentiation comes from Ego. Ego separates us and differentiates things.

When we meditate on shiva, it’s an indirect subconscious programming – we tell the mind – be like that. But a better way is to meditate upon yourself. Meditation is the only answer to achieve this. And this will happen automatically. No effort required

How to do chanting with Mala?

You may wish to use a Mala(String of sacred beads) as a counter. But a Mala is so much more than that. As you see sound changes structure. So when you chant and hold this Mala in your hands, it charges this bead with special structure. It changes the structure of this Mala at a subtle level. Now this Mala will always resonate with that Mantra. As you touch it again and again, it will help you go deeper and deeper into that vibration.

Watch this video where I explain this.

Anupriya is an Alternative Educator, Holistic Healing Trainer, Trance Medium and now an Author who has mastered many different healing and teaching modalities. She has worked in La Wisdom Alternative Learning Center in Bangalore for 2 years. She has educated children and parents on varied topics like emotional awareness, casteism in india, team work, career choices and addiction awareness etc. She continues to intrigue the minds of young people with her logical and experimental approach. Having gone through her own painful spiritual journey, she also learnt every healing modality that she could get her hands on. She has been training people in – Meditations, Reiki Energy Healing, Emotional Freedom technique, different forms of Acupressure and Reflexology, Ayurvedic Colour Therapy, Sujok, Naturopathy, Bach Flower Remedies, Chakra Healing, Angel Healing and Pendulum Dowsing etc from past 5 years. She has also developed faster healing methods for trauma and abuse victims using various guided meditations, creative visualisations and breathwork. Her faster methods work best with working professionals who have little to no time for themselves and children who have no patience as she teaches very quick tips and tricks to recover from painful circumstances. She also offers longer ‘energy and consciousness’ courses for adults, teenagers and children who wish to awaken a deeper human and spiritual awareness within them.